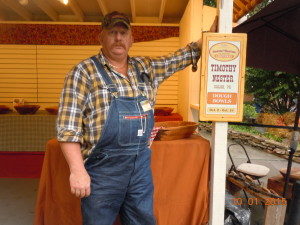 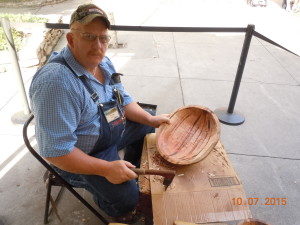 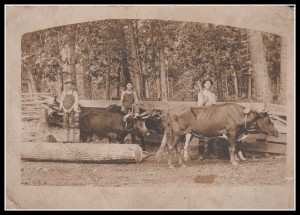 These wooden products are handmade with traditional hand tools in the Blue Ridge Mountains of VA by Tim Nester, a retired logger. They come from trees Native to the Appalachians in the tradition of Mountain Living. Tim Nester is a juried member of Southern Highland Craft Guild, Round the Mountain Artisans Network, and Black Horse Artisan Guild.  He has some pieces of work at the Artisans Visitor Center in Carroll County, VA. In 2015, Tim was invited to attend the craft show at Dollywood in TN.

Each individual piece of wood is selected for its beauty. Any tool marks remaining add to the unique characteristics of each piece. These items are all food safe and usable. They have been preserved with mineral oil and George’s ClubHouse Wax (bee’s wax and mineral oil mix).

In his grandma’s time, the family dough bowl was a major part of the food preparation. It was common for a man to carve a wooden dough bowl for his bride to be as a wedding gift. It was also common for a young lady to desire a carved dough bowl for her hope chest so when she was married she would have a very desirable kitchen tool. A mother’s dough bowl was usually one of the most sought after items in an estate. The bowl was usually passed down to the oldest daughter, treasured as a family heirloom and passed on to the next generation.

People are always asking how Tim got started in bowl carving. A few years ago Tim’s mother wanted a new dough bowl. He searched around for awhile and then realized there were no new bowls to be found that were actually hand made. Being from the country and dough bowls being part of his mountain roots, Tim found a local black smith and bought up some tools and started by trial and error. After some time with his newly found tools, Tim was able to get some pretty nice dough bowls to take shape. Then he started experimenting with other shapes and sizes, and people started taking notice.  He then decided to create this website.

Tim continues to go to local shows, but has also continued in the tradition of making bowls for Dollywood’s harvest celebration, which is something that he is extremely proud of. So when you buy a bowl from Tim, you know where it came from and that is was made in the U.S.A.